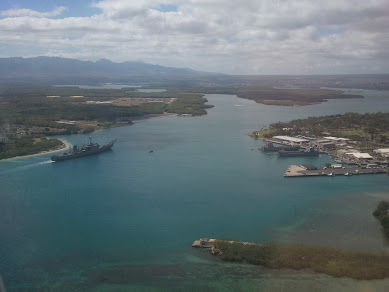 Life of the Land filed comments on May 24, 2021, regarding the US Department of Justice`s proposed settlement of a major Pearl Harbor contamination site.

The Federal Register included a Notice by the Justice Department on April 23, 2021, regarding a Settlement for Walker Bay pollution. Environment Hawai`i provided a link to the Settlement Agreement. Life of the Land opposes the proposed settlement.

Life of the Land is intimately familiar with military pollution and clean-up issues, especially Walker Bay, the most polluted pesticide site in Hawai`i, a site involving dioxin, the most dangerous man-made pollutant. One Hawai`i Department of Health (HDOH) official said it was the most contaminated site in the U.S. west of the Rockies.

Polychlorinated Biphenyls (PCBs), Dioxins, and Furans are a class of related chemicals that vary in toxicity. One can examine the amount and toxicity of each of the chemicals found at a contaminated site and convert them to the equivalent toxicity of the most dangerous chemical (2,3,7,8 TCDD), to generate the toxicity equivalents (TEQ).

The worker safety level for TEQ TCDD is measured in parts per trillion. Clean-up of industrial sites is triggered at 10 parts per billion. Walker Bay sites are as high as 1,530 parts per billion. The boundary edge of the contamination site is publicly known to be unknown.

Normally, when contamination is found, including every other military polluted site in Hawai`i that we are familiar with, involves gradually moves outward from the suspected site to find out where the boundary is. In this case, no one calculated where the pollution boundary was, every surface, subsurface and groundwater borehole resulted in significant hits, with one site recording a dioxin concentration 1500 times above the residential remediation level (300 times above the industrial remediation level). Dioxin is the most hazardous manmade pollutant.

Congress and the military established Technical Review Committees (TRCs) and Restoration Advisory Boards (RABs) to monitor military clean-up efforts, offer advice to the military, and to interface with the community.

Life of the Land`s Executive Director served as community co-chair of the Hickam RAB (1996-2005) and served on three other RABs and TRCs that covered the major Army, Navy, and Air Force installations on O`ahu.

Life of the Land reviewed all the files pertaining to Walker Bay that existed in the military depository and at the Hawai`i Department of Health`s Hazard Evaluation and Emergency Response (HEER) office.

The land originally belonged to John (Ioane) Kaneiakama Papa ʻĪʻī (1800–1870), a 19th-century educator, politician, and historian in the Kingdom of Hawaii. Insurrections forced the King to adopt the illegal Bayonet Constitution that disenfranchised Kanaka Maoli (Native Hawaiians) and turned over control of Puʻuloa (Pearl Harbor) to the U.S. government to gain the support of the U.S. Congress for a reciprocal trade agreement.

Homaikaia (Walker Bay) is an arm of Kaihuopala`ai (West Loch) along the western shore of Waipio Peninsula. On the north shore of Homaikaia was the 195 acre Loko Hanaloa (fish pond) which was filled in. On the south shore of Homaikaia was a sugar industry pesticide and fertilizer mixing area. Dioxin was used to fortify pesticides. The chemicals were then loaded into backpacks, trucks, and planes (a local airstrip was built at the site) for spraying on fields.

Oahu Sugar Company, Ltd. leased land for agricultural operations from 1947 until 1995. The site was used to store, mix, and load pesticides, herbicides, and fertilizers onto backpacks and airplanes. An airfield was built.

By 1995, more than a quarter of a century ago, it was determined that the former pesticide mixing area was highly contaminated. For several years nothing was done about it. Eventually, a fence enclosed the area. On a site visit, the fence was found to have been breached and bicycle tracks inside revealed that children had been playing there. Each year DOH filed a report with the State Legislature stating that it was a high priority issue.

In 1998 the Hawaii Department of Health issued an order to Oahu Sugar Co to conduct an environmental site assessment. Oahu Sugar submitted a Remedial Investigation Report to the HDOH. “Attempts at negotiating such a settlement were fruitless and Oahu Sugar received an order from EPA in March 2005 that purported to require certain testing and remediation of the site.”

In a filing to the State Legislature regarding its activities for FY 2002, the Hawai`i Department of Health’s Hazard Evaluation and Emergency Response (HEER) Office stated: “Sampling at this site by the HEER Office has indicated the elevated levels of dioxins, DDE, DDT ...This site has been given a high priority ranking by the HEER Office. The responsible party has recently conducted additional sampling to characterize the extent and nature of contamination.”

On February 7, 2007, the EPA wrote a letter to Kaanapali Land LLC asserting that Kaanapali was the successor to Oahu Sugar Company, Limited. The EPA believed that “Kaanapali Land, by virtue of certain corporate actions, is jointly and severally responsible for the performance of the response actions, including, without limitation, clean-up at the site.”

On September 30, 2009, the EPA issued a Unilateral Administrative Order to Kaanapali Land for the performance of work in support of a removal action at the former Oahu Sugar pesticide mixing site located on Waipio peninsula.

The U.S. Government (U.S. Navy, Environmental Protection Agency, National Oceanic and Atmospheric Administration, and Department of the Interior proposed) filed a lawsuit against O‘ahu Sugar Company, LLC, and its successor, Ka‘anapali Land, LLC on April 19, 2021, and filed a consent decree settling the dispute on the same day.

The polluting corporations would pay the Navy and the EPA $5 million for response costs and $2.5 million for natural resource damages from the companies’ insurance proceeds, in exchange for an end to the companies need to conduct site assessment and remediation.

Thus, before the extent of the pollution is known, and before determining the risk to the public, the parties to this mess will sweep everything under the rug.

The Consent Decree states, "Settling Defendants do not admit any liability to Plaintiff arising out of the transactions or occurrences alleged in the complaint."

"Settling Federal Agency does not admit any liability arising out of the transactions or occurrences alleged in any counterclaim that is or could be asserted by Settling Defendants."

It appears that the Settlement Agreement is more about getting rid of the regulatory problem while ignoring the underlying pollution problem.