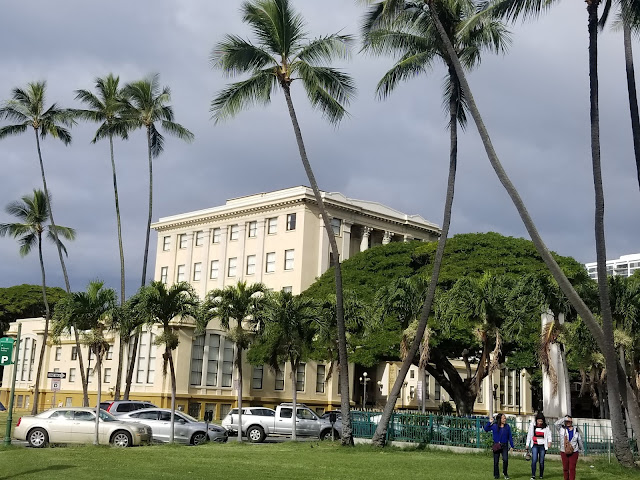 “Each person has the right to a clean and healthful environment.” The clause was proposed by the Hawai`i Constitutional Convention of 1978 and approved by the voters in November 1978. It is now Article XI Section 9 of the State Constitution.

The Constitutional Convention committees did not mention climate change. That issue rose to prominence as the Kyoto Protocol was being debated in the late 1990s.

The high court held that Life of the Land had a constitutional right to a “clean and healthful environment” and the Public Utilities Commission has a legal obligation to examine climate change.

“The commission shall explicitly consider, quantitatively or qualitatively, the effect of the State's reliance on fossil fuels on price volatility, export of funds for fuel imports, fuel supply reliability risk, and greenhouse gas emissions.

"The commission may determine that short-term costs or direct costs that are higher than alternatives relying more heavily on fossil fuels are reasonable, considering the impacts resulting from the use of fossil fuels.” (HRS §269-6)

The Commission re-opened the HELCO-Hu Honua Power Purchase Agreement proceeding to consider all aspects of the proposed contract including greenhouse gases.

“Given the interconnectedness of the issues in this docket, including new Issue No. 4 [greenhouse gases], established by this Order, the commission finds that for this specific docket, it would be beneficial for all Parties and Participants to address all issues set forth for this docket.”

An unresolved issue is what can or must be considered.

The Department of Health regulates all emissions including toxics and greenhouse gases.

Are all emissions or only greenhouse gas emissions on the table? The parties and participants in the proceeding disagree.

The Public Utilities Commission must write a thorough decision and order that addresses this issue. The losing side may appeal the proceeding back to the Hawai`i Supreme Court.

This is just one of several contentious issues that the Public Utilities Commission will be included in its decision.

“It is the policy of the State to promote the long-term viability of agriculture by establishing mechanisms that provide for preferential rates for the purchase of renewable energy produced in conjunction with agricultural activities.

The first request to use this section was for the highly contentious and ultimately failed Anaergia proposal for West Maui. Hu Honua filed the second request.

This law was written so that farmers could have a second revenue stream: crops plus energy sales. The added revenue would go to farmers.

Hu Honua wants it to be applied to their operations.

Hu Honua is part of a complex structure of inter-related companies that Hu Honua has refused to discuss in the Public Utilities Commission proceeding.

Two entities signed contracts to lease forests from Parker Ranch and Kamehameha School. One of those two entities will do all the chopping of trees and the re-planting of trees. That entity will then sell wood to Hu Honua.

Is Hu Honua an agricultural company?

If you buy a Christmas tree from a local store, which in turn requires someone to plant another tree for another future sale, are you a farmer?

The documents are hidden behind a wall of confidentiality. Life of the Land has been allowed to review some of them.

Tawhiri, owner of the South Point Wind Farm is a participant in the proceeding but not privy to these documents.

Are all emissions, or only greenhouse gas emissions, that can be assessed in this proceeding?

Both emissions are regulated by the Department of Health.

The Public Utilities Commission must figure out a way to address the issue. The losing side may appeal the proceeding back to the Hawai`i Supreme Court.

The third issue is what to compare the Hu Honua project to renewable energy facilities or fossil fuel generators?

The Consumer Advocate and Life of the Land note that recent solar plus battery contracts are far cheaper than Hu Honua.

Hu Honua asserts that it produces power 24/7 which renewable can`t do.

But is that relevant anymore? Can storage provide power on demand? Can the rate be designed to encourage customers to use solar and wind energy when they are available? These issues are being delved into in open dockets before the Public Utilities Commission.

Still another issue is the Waiver from Competitive Bidding. The Hu Honua project was given an exemption in 2008.

Should it continues to have effect? The Commission may have never rescinded a Waiver before but has asked parties to address the issue.

A new issue was recently raised by Hu Honua. Because Parker Ranch and Kamehameha School planted trees with the intent to harvest them, they pre-sequestered the carbon that will now be released by burning them.

The Hu Honua plant is 95% complete. Hu Honua believes that as long as they are able to slowly finish the rest of the construction, and end it just as the final approval is locked in place, they may be able to get a $150 million federal Investment Tax Credit.

“The completion of the HHB plant has been delayed but I have been told it is anticipated to be completed during the summer of 2020.”

“It would be very difficult for a wind or solar resource to do so, and it is very unlikely that any firm dispatchable renewable resource could be in place by Hu Honua planned online date later in 2020.”

“We understand that Hu Honua is planning to begin operation in mid-2020.”

HECO, MECO, and HELCO are currently reviewing 75 proposals for renewable energy, energy storage, of other  options for O`ahu, Maui, and Hawai`i Island.

The Public Utilities Commission must determine whether the Hu Honua proposal is reasonable and in the public interest.

Posted by Ililani Media at 8:44 AM