Life of the Land at the 2017 State Legislature 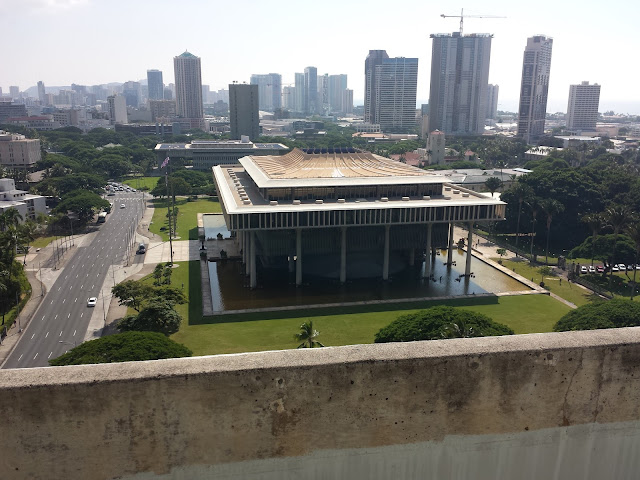 The view is from the Lanai of the Office of the Attorney General, which wraps almost all of the way around the top floor of the State Office Tower, 235 S. Beretania Street.

Life of the Land has filed testimony on over 15 bills, including issues dealing the usually array of anti-environmental issues such as gutting land use laws, and removing projects from the environmental review process and/or county zoning laws.

We are supporting monitors being hired by the land use commission, and moving agencies into the 21st century by encouraging electronic record keeping. We are also supporting greater funding to fight invasive species such as Rapid Ohia Death (ROD).

At the beginning of the session a few housekeeping resolutions are filed. Then in March additional resolutions are offered which are discussed during conference committee. The rule is that an agency must follow a concurrent resolution, but may or may not follow a Senate or House resolution.

HCR12/HR7 has already passed the House. The resolutions were introduced by House Speaker Souki and former House Speaker Say to designate January 24, 2017 as “Bioenergy Day”.

House Resolution 14 realigned leadership in the State House Republican Minority Caucus. Rep. Fukumoto spoke out against some of President Trump`s positions. Fukumoto was replaced by Representative Tupola, by a vote of 3-2 with one abstention. Fukumoto is considering leaving the Republican Party.

One bill dealt with the proposal to provide enhanced sentencing for utility meter readers who are attacked while performing their jobs. We testified in favor of uniform laws across all public workers. The IBEW noted that some workers were allegedly attacked for discovering marijuana plants, while others were attacked while seeking to clear trees during Tropical Storm Iselle. Under examination by Legislators, the IBEW was unable to elaborate on either issue.

Likewise, there was a bill to require that two senior staff members of the Public Utilities Commission must file annual financial disclosure statements with the Ethics Commission, but the filings would remain classified. We favor uniformity across agencies. Either the most senior staff of each State agency files or doesn`t file. If filings occur, they should be made public, in part because of transparency and open government, and in part because the Ethics Commission lacks the resources to review practically all of the annually-filed financial disclosure forms.

SB11 would protect homeless individuals from having their personal property taken from a state or county agency without proper documentation procedures and the ability to recovery property from the agency.

We have been hearing horror stories where personal identification, wallets, and medicine have been confiscated and/or thrown into the garbage during indiscriminate homeless sweeps by the City and County of Honolulu. This is unacceptable. We proposed modifying the bill with a new clause: “Notwithstanding any law to the contrary, it shall be unlawful for any state or county agency to confiscate government-issued identification documents and medicine.”

The California program also increased intervention by socioeconomically, culturally, and geographically diverse groups.  Hawai`i could benefit from a similar program.

Life of the Land testified on bills dealing with utility merger criteria, and incentive regulation aimed at rewarding the utility for moving more rapidly towards public interest policies. We also testified on a bill requiring greater use of third parties in overseeing renewable energy planning for electric utilities.

Currently around one-fifth of the electricity transmitted and sold by utilities is from renewable energy. But when other energy uses are mixed in, the renewable energy percentage drops to eight percent.

One bill proposed that ground transportation. like electricity, achieve the 100 percent renewable energy goal by 2045. We proposed benchmarks along the way, similar to electricity. We also favor the same approach for the Gas Company, which is currently exempt from the renewable energy requirement.

A bill was introduced to promote the use of hydrogen. The utilities are unable to use of all the renewable energy that is offered to them, so some of it is wasted, because most power purchase agreements forbid selling power to others. The proposal is that power producers could use excess energy for non-electric purposes, such as making hydrogen.

Life of the Land noted that 95 percent of all hydrogen in the US is made from fossil fuel, so the bill should state that there is a desire to increase the use of renewable hydrogen.

There are several bills that seek to harmonize, or lower to the least standard, existing practices. Working class people are struggling. Some entities are buying planes for the booming, $1.2 billion a month tourism industry. These entities get to purchase airplanes without paying any general excise tax. Therefore, those buying helicopters should also get the same tax breaks, regardless of the profitability of the helicopter industry. We testify against bills that seek to weaken standards and allow tax breaks for booming industries.

This is clearly an environmental issue, as health issues are important. We are currently monitoring a number of bills.

Prisons are for those serving sentences of more than a year. Jail is for short-timers, and those who can`t make bail and are stuck inside. Currently those not convicted who are awaiting trial, the homeless, and the mentally ill compromise the vast majority of those in jail. One approach is to design a better system, and then figure out what should be built. The Department of Public Safety is seeking a top-down, non-community friendly approach where the selection of a new facility is planned and built before any determination is made of what is needed.

Releasing some inmates in paper clothes without money or identification is crazy. A society should be judged on how it treats those at the bottom of the socioeconomic spectrum. Dealing with homelessness, mental issues, and affordable housing up front, will lower total societal costs, and alleviate stresses on the environment, that are currently caused by get touch social policies.

A few bills were introduced that would give preferential rates to lower income ratepayers and to those living in regions with large centralized renewable energy facilities.  Life of the Land supports differentiated rates. Economically challenged individuals should have lower electric rates, while boutiques that try to freeze sidewalks to lure customers into their stores should pay much higher rates.

There are opportunities to go much further, as we noted in our testimony. In the beginning all electricity came from the utility power plant, and radially spread out to end users. That system no longer exists.

Electricity and telecommunications move in multiple ways along a utility`s transmission and distribution grid. Today, 99 percent of the total physical number of all electricity generating stations in the State are rooftop solar systems. In aggregation, on the major islands, rooftop solar output exceeds the utility`s largest single power plant.

There are proposals floating around that transform the older cookie-cutter customer approach.

Commercial and Industrial (C&I) customers of HECO, MECO and HELCO can sign up for an Interruptible Load Tariff, whereby a few times a year they are cut off from the grid, in exchange for lower rates year-around. Residential customers should have the same option.

Commercial customers who want higher reliability levels, but who do not want to pay for on-site systems, should pay a premium for added grid-based reliability, under the existing cost-causer principle.

In 1990 the National Regulatory Research Institute (NRRI) published “Reliability Differentiated Pricing of Electricity Service. “It has been suggested that electricity customers be given the choice of opting for different levels of service reliability.  Customers would then subscribe to the level of reliability that best suits them and their processes. Such a choice would unbundle the service.”

"A review of electricity product differentiation" by C.K. Woo et al was published in the journal “Applied Energy” in 2013.  “Product differentiation recognizes that customers have heterogeneous preferences, with varying willingness-to-pay (WTP) for differentiated products. From a customer’s perspective, electricity has several distinct attributes: power quality, level of reliability, time of use (TOU), volume of usage (kWh), maximum demand (kW), and level of environmental impact. A differentiated product can be formed by packaging its non-price attributes at a commensurate price.”

In 2013 the National Association of Regulatory Utility Commissioners (NARUC) published “Resilience in Regulated Utilities” by Miles Keogh and Christina Cody. “Commissions may decide that the smartest approaches to investing in resilience may be those that not only differentiate between classes, but also within classes.”

Posted by Ililani Media at 4:14 PM