The Struggle to Protect Wa`ahila Ridge 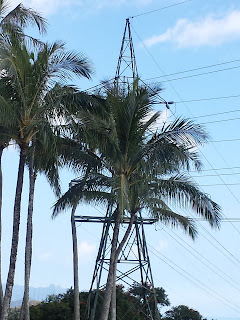 The widest and deepest utility fight in Hawai`i was the proposal by Hawaiian Electric Company (HECO) proposal to build the Kamoku-Pukele 138 kilovolt (kV) Transmission Line. HECO sought to build a high voltage transmission line on Wa`ahila Ridge, to connect a transmission substation near Iolani with one in the mauka section of Palolo.

The size of the conflict is reflected by the number of individuals and groups opposing the project, the sheer volume of documents generated and the number of legislative, executive and judicial bodies weighing in on the proposal. HECO gave the project twelve different names.

Hawaiian Electric Company (HECO) file an application with the Public Utilities Commission on June 1, 1973 requesting the right to spend funds to construction a 138-kV Transmission Line between the Kamoku and Pukele Substations.

“The request filed by Hawaiian Electric Company, Inc. on June 1, 1973 for authorization to make a capital expenditure of $1,130,000 to construct approximately 3.5 miles of 138 KV transmission lines from Pukele 138 KV Substation to the proposed 138 KV Kamoku Substation.”

The Public Utilities Commission approved the Pukele-Kamoku Transmission Line project on September 7, 1973. “Commission’s directive of September 7, 1973 requiring that the Company’s distribution circuits be installed underground along Waialae Avenue, King Street and University Avenue in conjunction with the construction of its proposed Pukele-Kamoku 138 KV Line No. 1.”

The Public Utilities Commission withdrew their approval, and then approved the Pukele-Kamoku 138-kV Transmission Line without a condition to underground distribution lines. “The Commission accepted that “Hawaiian Electric Company, Inc. be permitted to install its distribution circuits overhead along Waialae Avenue, King Street and University Avenue in conjunction with the construction of its proposed Pukele-Kamoku 138 KV Line 1.”

Insofar as the satisfaction of Chapter 343, Hawaii Revised Statutes, as it related to Chapter 183-41, HRS is concerned; an Environmental Impact Statement has been required in this project, no work within the State’s Conservation District may proceed until such time as the BLNR has accepted this EIS, and approved your CDUA...

Inasmuch as the required EIS is an integral part of CDUA-4/2/75-657, and, was initiated at your request, any past Board action on this CDUA is null and void.”

The Environmental Quality Commission (“EQC”) issued a ruling in 1977 on HECO’s OA-4/2/75-657 proposal since the project would trigger the EIS law on two counts: an easement across conservation land and the use of state park land.

“The Environmental Quality Commission has on its own motion ruled upon a recurring question that has lent itself to conflicting interpretations.

This ruling was made at the Commission meeting of November 30, 1977.

The instant case generating this ruling involves a project covered by conservation district use application OA-4/2/75-657 on file with the Department of Land and Natural Resources.

This project is proposed by the Hawaiian Electric Company, Inc., and entails installation of 138 KV transmission lines from Halawa to Pukele.

The transmission lines would cross conservation district lands, portions of which are owned by the State.

At issues is, who is responsible for meeting Chapter 343 requirements: HECO as an applicant, or DLNR as a proposing agency?”

The Palolo community filed a lawsuit against the project.  An out-of-court settlement was reached in 1980 appearing to end the project. The Agreement specified that there is a permanent “Overhead Exclusion Zone” for new high-voltage transmission lines in Palolo.

HECO then filed for a third Conservation District Use Application. This one was accepted.

In 1993 HECO issued an Environmental Impact Statement Preparation Notice for the proposed line but withdrew the project in 1994.

During the years 1998-2000 HECO wrote a copyrighted Draft EIS which was rejected by the Office of Environmental Control because public documents can’t be copyrighted.

The Board of Land and Natural Resources held a public hearing on the CDUA on March 22, 2001. Requests for a contested case hearing were made by several parties.

The Board of Land and Natural Resources admitted parties HECO, Life of the Land, Malama O Manoa, and The Outdoor Circle as parties to the contested case. Retired Judge E. John McConnell was appointed the hearing officer by BLNR.

The Evidentiary Hearing was held on November 1-9, 2001. A HECO witness swore under oath than an electronic version existed.

In June 2002 the Board of Land and Natural Resources rejected HECO’s proposal.

HECO financed the Undergrounding and Visual Mitigation study which was delegated to the Honolulu Chapter of the American Institute of Architects which subcontracted it to EarthPlan. A community advisory group including The Outdoor Circle and Life of the Land was permitted to comment on visual mitigation. The cost analysis was written by a consultant with only one thought in mind. How to scare the public into rejecting undergrounding. The community advisory group was not permitted to influence the outcome of the cost study.

HECO created the Hawaii Energy Policy Group. HECO restricted membership and attendance for over a year while claiming they had nothing to do with its formation or oversight.